Bath Humane Society: a history and an ode

Alongside the Kennett and Avon Canal in Bath is Top Lock Cottage, a former canal lock-keeper's cottage. It also used to hold rescue equipment on behalf of the Bath Humane Society, as a sign on its wall still attests. 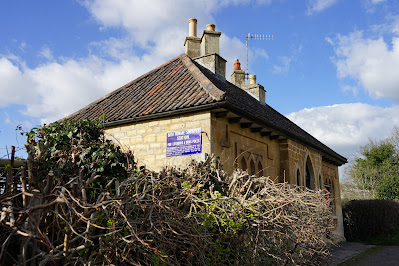 This society made life-saving equipment available to the public to rescue people from water. A booklet from 1806 now in the Wellcome Library gives more information about how the Society operated.

It aimed to provide assistance with all stages of the rescue process. Grappling poles allowed people to be rescued from the water and brought to dry land; rewards encouraged the public to make the effort to use them; and printed 'Directions'for performing rescues were distributed among the 'lower classes'. Receiving houses provided spaces to attempt resuscitation. A number of local doctors were willing to provide medical treatment. 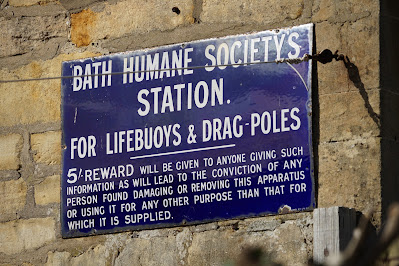 The pamphlet is not so much celebratory as reproachful in tone. It reproaches the city for not having established this system sooner; the canal builders for not making their sluices and locks safer; parents for letting their children play by the water; the working classes, who had formerly assumed assistance was futile; and reckless young ice-skaters. Those last are advised to 'make it a practice ... of holding a staff or a strong walking-stick, of a convenient length, in both hands in a horizontal direction' so that in case of accident, they would stay 'suspended' until help arrived. I suspect that this recommendation was rarely followed.

The rescues of 1805 and 1806 - successful or not - are detailed. In its first year, the Bath Humane Society paid out rewards for those involved in recovering 'a young lad' who seems not to have survived; a six-year-old boy; a pregnant woman; two children (one of whom did not survive); and a woman who threw herself in the river. All these incidents occurred in August and September. The following June, premiums were paid for recovery of the body of a young woman; a chimney-sweep in 'a fit of desperation'; a boy working for masons who fell and could not be saved; a 6-year-old who recovered fully; and two young brothers, the younger of whom could not be revived. In July, a 7-year-old boy survived; an 8-year-old did not; a 5-year-old was retrieved with some difficulty; two unnamed boys were recovered lifeless by the same man, three days apart; another boy was successfully rescued the next day, as was a young man with his horse a day after that.

After much discussion of drag and grappling-hook design, and a list of subscribers, the booklet ends with an ode:

RESUSCITATION HAIL! whose potent breath
Can wrest the Victim from impending Death;
Type of the World's great Saviour! him whose hand
Could make the still, cold breast again expand;
And, list'ning to the Widow's piercing cries,
Command to life her bier-stretch'd Son to rise;
Oh! glorious attribute of pow'r divine!
To shield, to succour, and to save be thine!
The treach'rous stream, that stilly winds
Around old Badon's walls,
Lures to its bosom youthful minds,
And by its smile enthrals.
One, fearless of its surface green,
Adventures from the shore:-
Through eddies strong, or depths unseen,
He sinks - to rise no more!
And scorning Heav'n's first law, ah! wretch accurs'd!
"His Maker braves, and dares him to the worst!"
Meet consolation, with reprovals kind,
Cheer'd, sooth'd, and reconciled the chasten'd mind.
Whilst mild RELIGION ev'ry effort tries,
To crush DESPAIR, and point to happier skies.
Oh! then, ye Promoters of this hallow'd plan,
Who the embers of life thus successfully fan;
Proceed in your labours, so nobly begun,
And be to mischance, like the beams of the sun,
Whose heat can invig'rate the senseless cold clod!
And bid the sunk spirit rejoice in its God!
Keep from obloquy's stain, what too long has been said
- In Avon once sunk - irretrievably dead;
Be the slaying of thousands the boast of the Brave -
Your triumphs are greater - your boast is - TO SAVE!

The author was William Meyler, a local bookseller and newspaper editor. Born in Anglesey, he had been apprenticed to a bookshop owner in Bath before opening his own shop and later becoming a publisher. He was also known as a poet, performing addresses and works at the theatre, and in 1792 launched the Bath Herald and General Advertiser. He was by 1806 a prominent citizen, member of many charitable and other societies, City Councillor, and Deputy Provincial Grand Master of Somerset in the Freemasons. A decade later, Mary Godwin and her future husband Percy Bysshe Shelley lodged at Meyler's shop while she completed Frankenstein.

Bath's smaller organisation had been inspired by the Royal Humane Society, whose original full title  was the 'Humane Society for the recovery of persons apparently dead by drowning'. It had been founded in London in 1774 and promoted resuscitation of the drowned. While it apparently impressed the Bath author with its success in restoring people in whom 'every spark of vitality appeared to have been extinguished', they had to concede that the local organisation's successes lay in rescuing people who still showed signs of life. A better result, but a less dramatic one!

I bet the canal lock-keeper really enjoyed the location of his cottage, and its views. And I can understand why the building held rescue equipment and services for the Bath Humane Society. But what was Mary Godwin and Percy Bysshe Shelley's connection with the Meyler shop? It seems like an obscure place to write top quality literature.

Because Bath was so fashionable, accommodation was in high demand and lots of shopowners and others let out rooms if they could - so this is more an AirBnB situation than a deliberate choice of shop, I think.

There would have been some interest in saving the lives of drowning people in the Godwin-Shelley household. Mary Shelley (née Godwin) was the daughter of Mary Wollstonecraft, who had tried to drown herself by jumping off Putney Bridge. Held up in the water by her voluminous skirts, she was rescued by a passing boatman. I've seen a party of Frankenstein fans visiting the bridge because of this connection, though of course it's not the same structure as the rickety wooden thing that was there in 1797.

The low survival rate of the rescued people must have been partly due to the ineffective revival techniques of the period. It wasn't till the discovery of mouth-to-mouth resuscitation that there was much hope of getting them back.

A splendid piece of home-made poetry, almost worthy of inclusion in The Stuffed Owl.

Good to read something of the origins of this society. In 'The Lost Pubs of Bath' (2004), Andrew Swift and Kirsten Elliott mention 11 establishments that acted as Bath Humane Society 'receiving stations' for those rescued from the river or canal. Six are gone – the 'Bladud's Head' (90 Walcot Street), the 'Cleveland Arms' (on the corner of Sydney Wharf and Raby Mews), the 'Folly' (between the canal and railway near Grosvenor Bridge), the 'Jolly Boatman' (an unclear location in Widcombe, presumably by the canal), the 'Ostrich' (near the old city prison in Grove Street), and the 'White Hart' (in Batheaston).

From their locations we can surmise from where – river or canal – each of these places might have been expected to receive rescued people and casualties. The 'Bladud's Head', ex-'Dolphin', ex-'Green Park Tavern', 'Hop Pole', 'Locksbrook', 'Ostrich', and Batheaston 'White Hart' likely primarily 'served' the Avon; the 'Cleveland Arms', 'George', (probably) 'Jolly Boatman', and the Widcombe 'White Hart' would have been more oriented towards canalside rescues, though the 'George' might also have been the destination for those from the Avon. The 'Folly' stood close to both waterways.