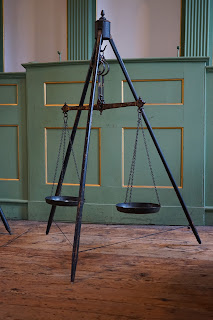 In York's Merchant Adventurers' Hall is a fine pair of scales, dated 1790. As well as the year, they also have the maker's details: De Grave London fecit [De Grave London made]. 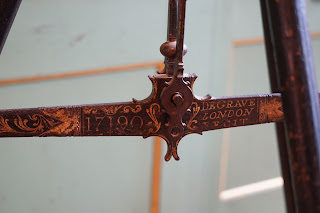 The scales were essential to the Merchant Adventurers, traders who [ad]ventured their money investing in overseas trade; many were mercers (cloth traders). As a guild company, they used their hall to transcact business from their founding in the fourteenth century. They also performed a regulatory function, regularly checking the city's scales and goods against standard weights and measures to ensure fairness. 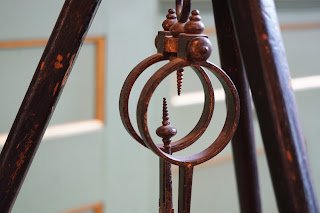 Charles De Grave had gone into business making scales in about 1767 and was still running the company when these scales went to York. 1790 was also the year he married his second wife Mary; she must have been younger than him, because she took over the business after his death in 1799 and remained in charge until her death in about 1840. The couple's son had joined as an apprentice in 1806, and in 1817 the business became known as Mary De Grave and Son; it was based at 59 St Martin's le Grand. That location was fortuitous: the General Post Office headquarters were established on the same street in 1829, and their proximity perhaps helped De Grave become the suppliers of post office scales. Other notable customers included the Exchequer, the Assay Office, and the Royal Mint; De Grave also manufactured scales to weigh everything from diamonds to jockeys. The company remained in the family - although the year after Mary's death, the firm became De Grave, Short and Co, and later De Grave, Short and Fanner - until it was taken over by Avery in 1922.

Email ThisBlogThis!Share to TwitterShare to FacebookShare to Pinterest
READ MORE ABOUT london, postal