Two very interesting books are currently being crowdfunded on the Unbound site. If you'd like to see either of them published, you can pledge in return for copies of the published works and all sorts of other rewards!

Fiction and non-fiction author, and creator of the fabulous Victorian England site, Lee Jackson is proposing Most Peculiar: Secrets of Victorian London, 'an alternative guidebook to the nineteenth-century capital'. Full of the sorts of traces I love to share on this blog, it will be crammed with images and information.

A more wide-ranging work in a very different format is proposed by Peter Ashley of Unmitigated England. Having published a number of interesting and beautifully-interested books, including the Unmitigated England trilogy itself, he has now put together a collection of 100 postcards featuring his photographs, in a great box evoking Kodak photo paper boxes. A gorgeous selection to keep or post!

We're nearly at the end of this series, as we look at the final original plaque in the Watts Memorial - aptly, the last to be added. However, still to come are a later addition; Watts' own memorials; a look back at what we might have learned from these stories; and suggestions for further reading.

In autumn 1927, two workmen from the Notting Hill Electric Light Company entered a disused inspection chamber in Addison Avenue, Kensington. These 'high tension chambers' were effectively inspection shafts allowing the buried high-tension cables carrying electricity to be inspected. Once inside, the workmen were overcome by poison gas. Their colleague, an assistant engineer who had tried to warn them of the dangers and had waited outside, raised the alert. As other cases have demonstrated, such gases are no respecters of rescuers: when PC Percy Edwin Cook descended in an attempt to rescue the men, he too was overcome. All three men died. Although the gas was not identified, it was believed to be carbon dioxide.

Addison Avenue was perhaps an unlikely place for an industrial accident, its genteel location a stark contrast to the tragic drama enacted there. Leading off Holland Park Avenue, it is the road to the west of Norland Square. Both were part of the Norland Estate, built from 1839 as a speculative venture by solicitor Charles Richardson. He had raised loans and begun building, as well as selling building leases to others including fellow lawyer Charles Stewart, a wealthy barrister and MP. The major difficulty these speculators faced was attracting people to live so far out of London. Although they did succeed in the end, Richardson himself had gone heavily into debt and went bankrupt. He reappeared in Glasgow in 1855 as a seller of patent medicines (bankrupts are not allowed to practice as solicitors). However, he soon bounced back and in 1857 he was back in London with his old law partner. By 1927, though, this slightly dubious early history of the estate had been forgotten, while improvements in public transport meant that Addison Avenue was very much part of London.

The incident was not only reported in newspapers, which praised Cook's courage. It was also raised by Lord Russell in the House of Lords. He pointed out that the chamber had not been opened for over twenty years, and called for measures to be taken in similar circumstances to ensure that gases were tested for or dispersed. Viscount Peel, for the government, pointed out that this was an unused shaft the company thought might be suitable for inspections, rather than a designated inspection chamber to which regulations applied. It was perhaps partly that distinction which cost three men their lives.

This sign in Welling, like the previous one in Tottenham Court Road, isn't really a ghost sign as it's not painted onto the wall. Instead, the lettering is embossed - and sadly, some has been obscured while the rest is behind a newer sign. However, the first two lines are clearly visible. 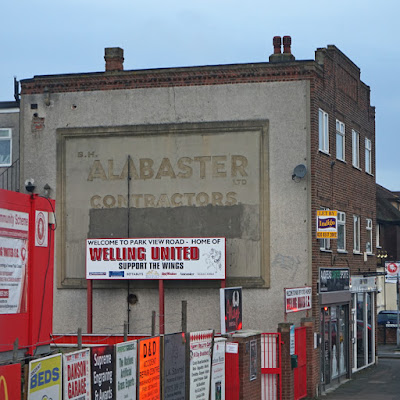 At first glance, the sign advertises alabaster, but a closer look reveals that it's for S H Alabaster Ltd, Contractors. Family historian Laraine Hake found out more about the firm: S H was Sidney Herbert Alabaster, a master builder born in about 1886 who built houses in Bexleyheath as well as a swimming pool in Danson Park. Her father remembered childhood visits from Uncle Sid in his Vauxhall tourer, bearing Christmas goodies and a bottle of whisky. Sid's nephew Alf Oram describes meeting this wealthy uncle in the 1920s, when he similarly arrived in a motor car and handed out generous pocket money!