Clapham Common Deep Level Shelter was one of eight air raid shelters built below London during the Second World War and completed in 1942. Its neighbour Clapham South now features on London Transport Museum's Hidden London programme, but Clapham Common has been more difficult to access. 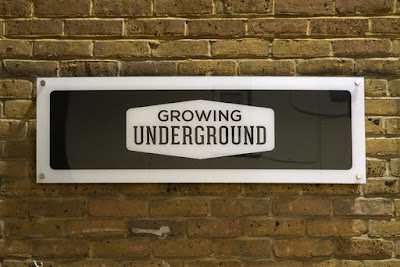 However, the current tenants Growing Underground are currently offering tours of their extraordinary farm. Yes, farm! The former shelter is now used to grow micro herbs using hydroponics. A visit involves the amazing experience of standing among thousands of tiny plants bathed in pink light while Northern Line trains rumble nearby. 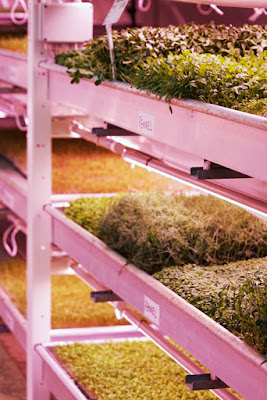 Growing Underground is the world's first underground farm, and focused on sustainability - the lights are low-energy LEDs, for example. They go on at night and off in the day, so that their warmth is emitted when the tunnels are coldest and electricity - from green suppliers - is cheapest. The matting on which the shoots are grown is recycled carpet. And food miles are obviously minimal! 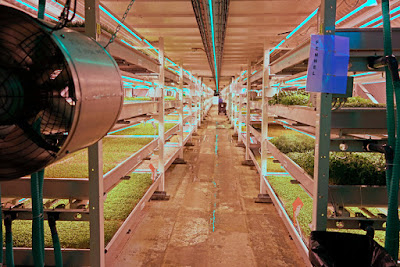 In one tunnel, seeds are sprouted and the finished product is cut, weighed and packed. In another, the sprouted seeds are grown to harvesting size - still tiny, meaning that they have powerful flavours. 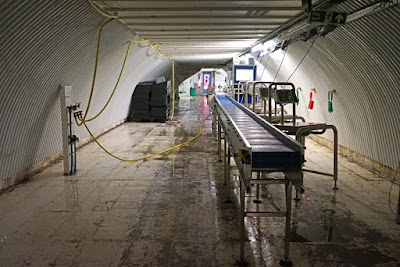 Conditions are carefully controlled to ensure a hygienic, nut-free environment. Visitors wear hairnets, coats and wellies, with the 'clean' side of the changing room entrance carefully divided off. That cleanliness and the white-lined tunnels make this visit rather different than a walk around Clapham South. 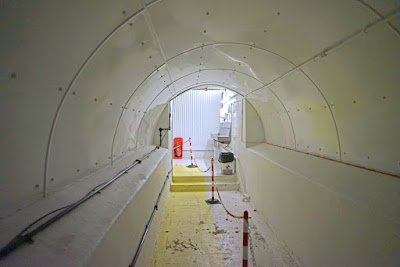 Another difference is that it has a lift - invaluable for getting produce out. It's also handy if you don't fancy walking up 180 stairs to the exit. 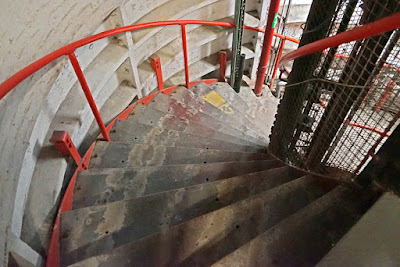 If you'd like to try the produce from London's strangest farm (do - it's delicious), it's on sale in Ocado, Marks and Spencer and Planet Organic. Alternatively, take one of their tours and get the freshest of punnets to take away! 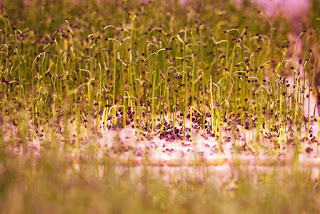 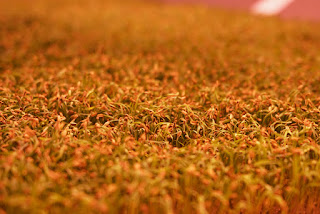 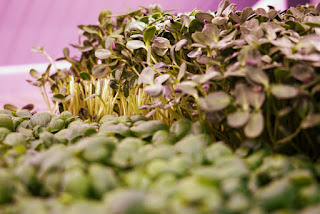 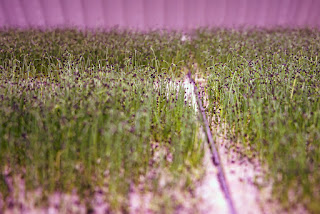 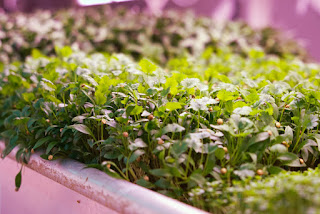 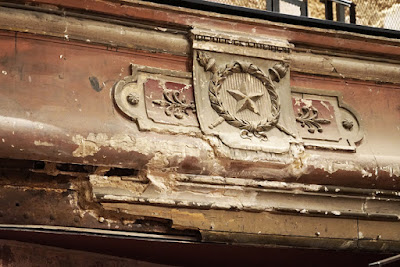 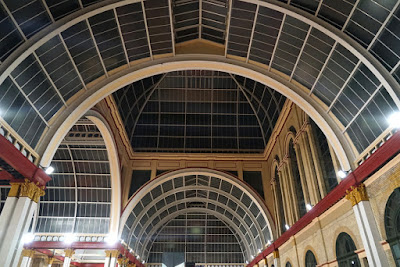 Through the huge glass atrium is a very special space, reopened for performances after eighty years - but not restored. Instead, it has been put in a state of 'arrested decay' and this fantastic decision means it retains a unique atmosphere. 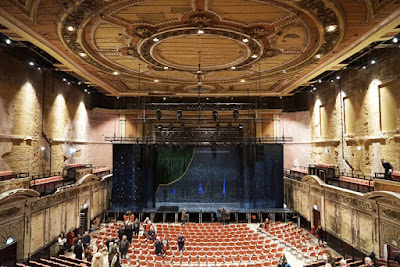 The theatre first opened in 1875, but it wasn't the best design - its architect John Johnson had more experience of concert halls, and basically sized one up to accommodate a theatre audience of 3,000. The auditorium may have been unsatisfactory, but the stage machinery was state-of-the-art. By the end of the century, films were also being shown here. 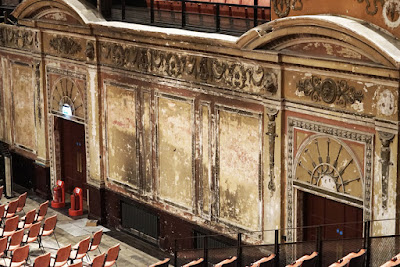 During the First World War, Ally Pally held interned foreign nationals and the theatre became a chapel, although films were also shown. Further work was carried out for its reopening in the 1920s. It enjoyed a golden period under the management of Archie Pitt, husband of Gracie Fields. She trialled many of her productions here before taking the on national tours or West End theatres. By the 1930s, it was out of use and the BBC took it over as a props store. The 1980s fire at Alexandra Palace was the last straw, and the theatre became derelict. 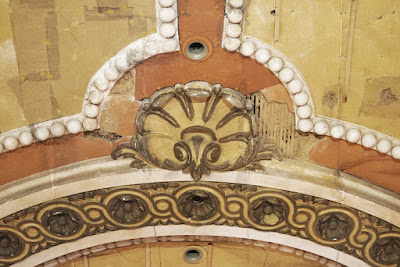 A great deal of care went into keeping the decaying splendour of the theatre intact while also making it a safe, usable space for its users. The lath and plaster ceiling with its decorative mouldings (added in the 1920s) was stabilised, so it won't be falling on the audience's heads - but no more than that was done. Holes and exposed areas have been left unchanged. 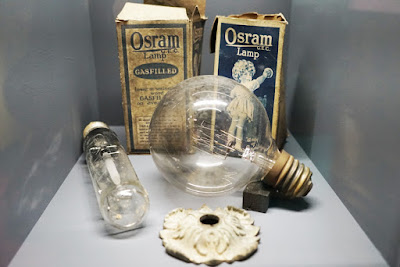 The floorboards were carefully lifted so the crumbling supports could be replaced, then laid back in their original positions. During the work, detritus which had made its way under the floor was retrieved and the best finds - including some fantastic old lightbulbs - are now on display in the East Court. 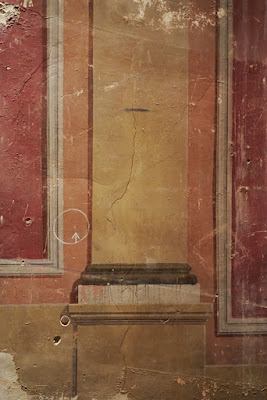 Paintwork has also been preserved in its distressed condition. Loose detritus was carefully brushed off, then the panels were sealed with a clear coating. 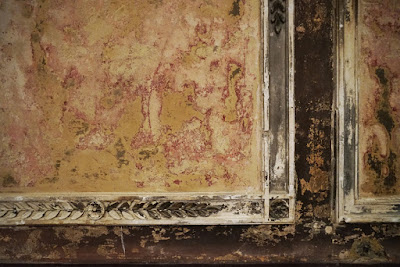 Retractable modern seating and flexible staging will allow the theatre to be used for all sorts of performances - and have addressed some of the original theatre's flaws, for example by improving sightlines. Forthcoming performances are already proving popular, and it's wonderful to know that this theatre has a new lease of life - without losing any of its older charms. 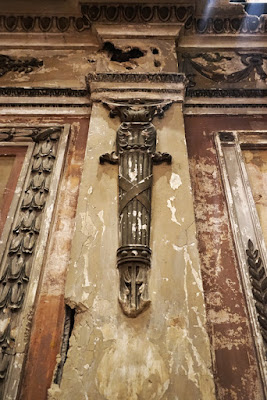 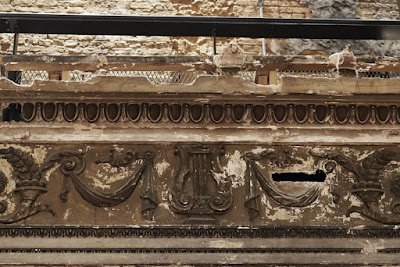 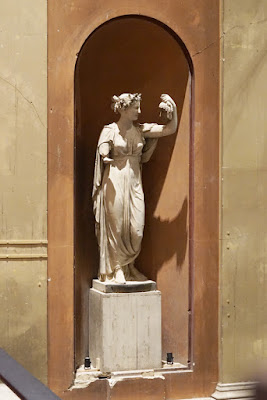