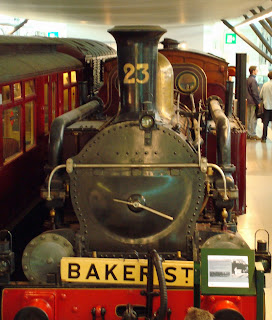 150 years ago, on 10 January 1863, the London Underground opened its first line to the public. (There had been an official opening on the 9 January, with various dignitaries enjoying a banquet at Farringdon Station). The Metropolitan Line ran from Paddington, via Edgware Road, Baker Street, Portland Road [Great Portland Street], Gower Street [Euston Square] and King's Cross, to Farringdon. Built using the 'cut and cover' method (in effect, a huge trench was dug, then roofed over), it required 'the great and novel task of burrowing under ground for between three and four miles, of undermining streets and houses, of working in the midst of water pipes, gas pipes, sewers, mains and ditches', as the Daily News described. Their reporter's assessment of the journey was cautiously positive:

The first feeling created in the minds of those who come upon the new line with the ordinary ideas of railway travelling is one of disappointment, arising from the slowness of the progress made; but where there are five stations between the two terminal ones to be stopped at this is unavoidable. The comparative darkness is also a disagreeable feature of the line, but this again it was impossible under the circumstances to avoid, and wherever the sun's light could be admitted it has been let in. These two points are the principle drawbacks of the undertaking. In other respects the least inconvenience was not experienced. The train worked smoothly on the rails, the carriages were brought up with ease, there was no sense of oppression from want of air, and there was no inconvenience from vapour.

The Times was equally upbeat, although its optimism about the atmosphere below ground would prove unfounded:


There is one point to which attention was attracted as being adverse to the general expectation, and that was that it was understood that there was to be no steam or smoke from the engines used in working this tunnel railway. All we can say is, that on one of the journeys between Portland-road and Baker-street, not only were the passengers enveloped in steam, but it is extremely doubtful if they were not subjected to the unpleasantness of smoke also.

Over the next century and a half, the underground would expand and in doing so, transform and reshape the city. It would also become an essential part of the city, one with which many of us continue to have a love-hate relationship. However, its early passengers had rather more to complain about than the first news reports might suggest, while many male staff found the atmosphere so bad that they sought permission to grow beards in an attempt to protect themselves. The mixture of steam and tunnels was not really a happy one, as I have discussed before, and electrification of the system in 1905 must have been a huge relief for its users. Of course, we have our own discomforts and annoyances to complain about today...