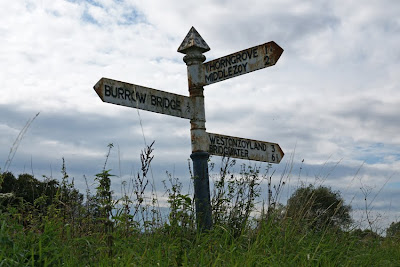 On the Somerset Levels, many traditional cast-iron fingerpost signs remain in use. They have a pyramid-shaped top with the initials ‘SCC’ on each side. Just visible on the grey central post is the word ‘Somerset’ descending vertically.

Fingerposts have a venerable history. They date back to the seventeenth century, while legislation mandating their use on turnpikes was passed in the 1760s and 1770s. Somerset’s examples are generally around a century old: responsibility for signs was passed from cycling and motoring organisations to local authorities in 1903. Although the black lettering on white ground conforms to standards imposed in 1933, the grey post used in Somerset does not. The county continued its gentle subversion by resisting encouragement to replace the fingerposts with standard signs in the 1960s.

This example is a little the worse for wear. However, it is still legible with its fingers pointing in the right directions, and adds to the character of its location. Whatever the benefits of standardised road signs, these distinctive characteristics are also valuable components of the local landscape. It is therefore praiseworthy that Somerset repairs and maintains these fingerposts rather than replacing them with more modern, less characterful versions.

Click here for more signposts from this (very) occasional series.

I remember that many fingerposts until at least the 1960s had a six-digit National Grid location on them. As a walker without a GPS, I would find that useful today.

I think a lot of Dorset signposts had grid references - they were used in several counties at the request of the government. Presumably cost and changing fashions explain why they weren't adopted nationwide.