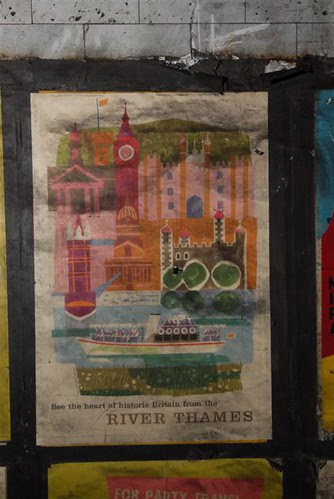 In the late 1950s, the lifts at Notting Hill Gate tube station were replaced by escalators. A passageway was closed off and is no longer accessible to the public. Sealed inside, posters still covered the walls. From films to toothpaste, the advertisements offer a frozen moment of commercial art and daily life.

Away from light and people, forgotten until the passage was revisited during work at the station, they have remained in remarkably good condition. After a brief moment of attention, they have been left safely in situ once more (perhaps to be rediscovered in another half-century).

Thanks to a series of photographs taken by mikeyashworth for London Underground, we can share this snapshot of late-1950s advertising. The full set of pictures, with more information, is here.