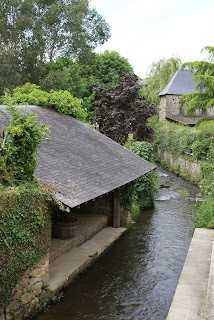 Many Breton towns and villages have at least one lavoir, or laundry-place. Pontrieux has fifty! These are public, outdoor spaces designed for doing laundry; the one pictured here is in the beautiful little town of Jugon les Lacs.

In many parts of France the laundry was a weekly chore, but not in Brittany. Local women met here only twice a year in April and September. Pierre-Jakez Helias, in his wonderful account of a childhood in Brittany, describes the process: it lasted three days, which he nicknamed Purgatory, Hell and Heaven. First came the purgatory of piling up the washing in enormous wooden buckets covered with a coarse fabric, topped with ash. Boiling water was poured over, and the ashy water soaked the clothes (washing powder wasn't available). They were then left overnight.

Then came the second day of hell: the women would beat the laundry from dawn until about 4pm without a break. Once it was put into clean water to rinse - some villages had a second, smaller lavoir for the purpose - the women would get to eat a late lunch. When the rinsing was done, one of the women had to get into the cold water to fish the clean garments out. They were spread onto neighbouring land to dry; the final, heavenly day, there was nothing to do except watch and turn the drying clothes.

Given the infrequency of washing, it's no surprise that even Helias's impoverished father brought two dozen shirts with him when he got married!