The Health of the People is the Highest Law 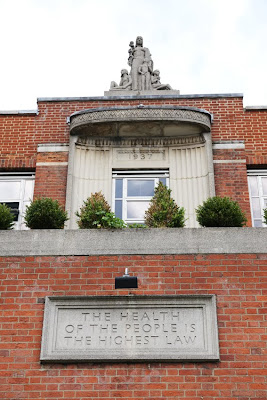 This inscription, a quotation from Cicero, stands above the door of a building at the Elephant end of the Walworth Road. A little higher is the date, 1937, but you hardly need to be told that as the Art Deco touches shout '1930s'. The plants here are an integral 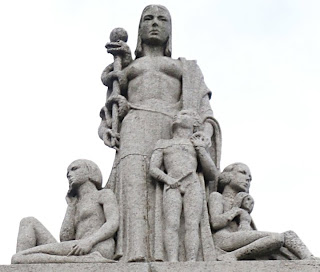 part of the design: their planters are built in to the coping. At the apex, a woman holding a rod of Asclepius (the symbol of healing) is surrounded by children. Note their 1930s bobs.
With all these clues, you've probably worked out that the building had a medical purpose: it was the Public Health Centre at Southwark. Inside were facilities including doctors, dentists, a TB clinic, maternity services and a solarium for exposure to artificial sunlight. The Public Analyst was also based here, with an office as well as a laboratory. This combination of services in one place was pioneering - a sign of the influence of Alfred and Ada Salter on the area - and attracted plenty of press coverage and borough pride. Newspapers put the cost of the centre at between £50,000 and £60,000.

Among the list of facilities, the sunlight clinic perhaps seems surprising. However, in the 1920s and 1930s there was great awareness of sunlight's use in improving health, notably to treat TB and rickets. Since lack of time outdoors and the British climate could limit exposure to the sun, especially for slum children and some workers such as miners, clinics offered 'artificial sunlight'. (Click below to see footage of a Maharajah's visit to one such clinic in 1925.) Indeed, progressive reformers emphasised the importance of light in general, and the Public Health Centre was praised for its bright interiors.

The building is still a clinic today, although it no longer offers the range of services originally housed here. However, it is interesting that there has recently been something of a return to this pre-NHS concept with the (often controversial) arrival of polyclinics. The most inspirational aspect of the building, though, is surely that inscription carved above its door.

"Salus populi suprema lex" (the Latin version) is still L B Lewisham's motto. How cool to have a Latin motto!

Of course! Good Lewisham citizen that I am, I'd completely forgotten that.