In discussing the extraordinary gravestone of George Taylor, pugilist and master of the cross-buttock throw, I mentioned his dispute with fellow prize-fighter Jack Broughton. The latter's career was even more notable, for he was the first person to formulate boxing rules.
Fed up of working for Taylor, who stole much of his glory despite being the lesser fighter, Broughton opened his own amphitheatre. Thanks to wealthy backers including the Duke of Cumberland, he was able to offer more luxurious surroundings than had previously been available to fight fans. However, the sport itself was unregulated and highly dangerous: fighting was bare-knuckled, supporters liked to see plenty of blood, and contests involved plenty of wrestling and dirty tactics as well as the punches we now associate with boxing. Rules were sometimes imposed, but they varied from match to match. 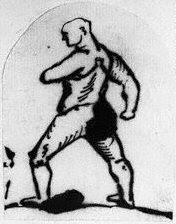 Broughton was a tall, large and muscular man. Before turning full-time to prize-fighting, he had been a waterman and won Doggett's Coat and Badge Race in 1730. That power and strength generally served him very well in the boxing ring but when he fought George Stephenson in 1741, his opponent died. That fatality appears to have been the motivation for Broughton to set out rules for fights in his amphitheatre. They were generally adopted in the city, and later formed the basis of the London Prize Ring Rules which governed matches until the Marquess of Queensberry Rules came into force.
Broughton's rules included prohibitions on hitting a man while he was down or seizing him below the waist. A man who failed to rise within half a minute was considered beaten. Nonetheless, this was still bare-knuckle fighting which allowed a range of moves now forbidden. The sport existed in a context of incredibly brutal entertainment: Broughton's amphitheatre was also the venue for contests using weapons and for bear-baiting.
His other contributions to the game include the introduction of boxing gloves (for his gentleman pupils, not for prize fights) and a more scientific approach to the sport. He continued teaching until at least 1787, when he was in his mid-eighties, and died in 1789. Broughton's resting place is rather more prestigious than that of his old colleague and opponent George Taylor: he is buried in Westminster Abbey. However, he had similar issues with his gravestone: the epitaph he had chosen, 'Champion of England', was considered unsuitable and was only added in 1988 (with the additional word 'prizefighter' clarifying it).
Image: drawing of Jack Broughton by Marquess Townshend, from Wikipedia.
- August 05, 2011

Curiously, the introduction of boxing gloves actually made boxing far more dangerous. Bare-knuckle boxers avoided punching the head because the hard bone was too painful. Gloves meant they could rain blows onto the head and cause severe brain damage.

That does make sense, and is a good example of unintended consequences!

Bare knuckled boxing should not have been called a sport, even in the past. Bloody, largely unregulated, brutal and ultimately dangerous, we tend to think of it akin to bear bating or pit bull fights to the death.

Yet people (men?) turned up to watch, to place bets and to have a fun evening. I don't understand it.