I can't say I wasn't warned - Londonist had been less than enthusiastic - but I still went along to have a look at some of the seven art installations which make up Drift 08. The idea is brilliant: art placed along the Thames to bring it 'out of the galleries and into public places so it can be enjoyed by everyone'. There are pieces at various points in the rive between Blackfriars Bridge and Canary Wharf.

Ghost Bridge particularly appealed, because I have a soft spot for the remains of the first Blackfriars Railway Bridge and loved the idea of its ghostly reincarnation. Unfortunately, I had to agree with Londonist that 'whichever way you view it, it’s just some green lasers across the river.' In fact, not even: from some points you could barely see the lasers and from others the equipment was that bit too visible. A nice idea, and the green light is certainly attention-catching, but... 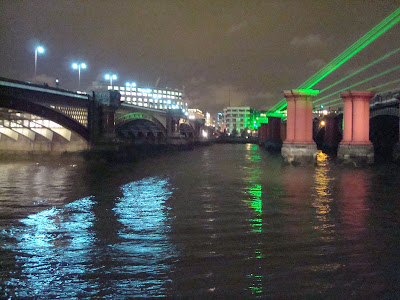 Saved from Drowning is quite fun, but perhaps less meaningful than it aspires to be. It was not so much a 'steel painting' recalling those who have drowned in the river as a rather wonky mirror. 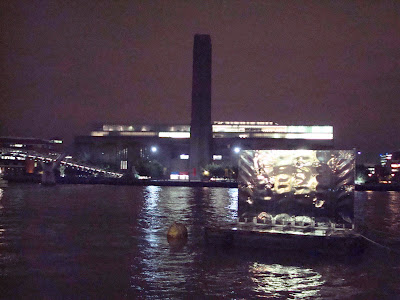 This piece is Migration. Unfortunately, it is rather unassuming (you might miss it altogether if you weren't looking for it) and is thus overshadowed by its neighbours: London Bridge, the Tower of London and HMS Belfast. 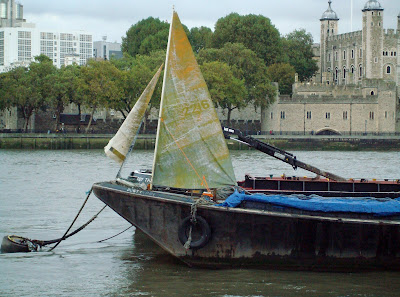 Biggest disappointment was 'Classification Pending', which had sounded lovely - at dusk, mythical creatures are projected into the river under London Bridge. Unfortunately, I couldn't actually see them - and I wasn't the only bemused person gazing forlornly at a Drift 08 map. Perhaps something had gone wrong; perhaps the map didn't pinpoint the spot clearly enough (it's rather vague); or perhaps the creatures are very, very shy. Whichever, this was one piece unlikely to be 'enjoyed by everyone'.

I love the idea of this exhibition. I quite enjoyed spotting a few of the pieces. However, it also felt like a missed opportunity to have some really exciting work in this most public of venues. The plan is for the festival to be an annual event: here's hoping we get something more enticing next year.

Practical info: there's still time to see the exhibition, which is on until 19 October 2008. Works are visible from bridges and walkways; the map (PDF) is here.

That's really disappointing - I too had read about these mythical creatures and was hoping to get down there and see them. Now I think perhaps I won't bother.

Incidentally, someone I know is working on the jack-up barge doing investigations next to Blackfriars Bridge - apparently they have been blocking the lasers from time to time, not on purpose of course...

I noticed that and wondered what it was! (Not that it blocked the lasers when I was there, but it wasn't far off them).