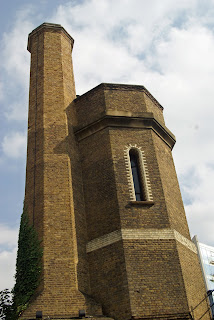 In the last of my Open House visits, I went to the Limehouse Accumulator Tower, just alongside Limehouse Basin. Vaguely associating the word 'accumulator' with electricity, I had very little idea what the tower's function had been (as we'll see, I wasn't alone in this). Luckily, an introductory talk made everything clear: the tower, built in 1869, was used for the storage of water under high pressure.
Back in the nineteenth century, before electricity came into general use, there was a demand for some form of instant power to operate machinery like cranes. (Steam power was less than instant: you had to get the fire going, heat the water...) Obviously, such demand would be particularly high somewhere like Limehouse Basin where coal was brought by ship and unloaded onto barges which would take it along the Regent's Canal. The answer was hydraulic power: water was forced under high pressure through pipes, until it reached a 'ram' which it would push into a cylinder, driving the machinery. 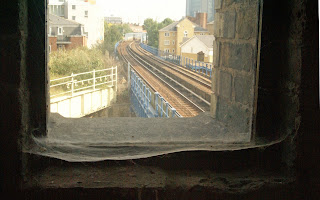 The pumping station itself has now gone; its role was to feed water under pressure of around 700 psi into a hydraulic main to which the machinery was connected. However, to ensure that the pressure didn't drop at times of high demand, water was kept under pressure in the accumulator tower by a large, gravel-filled weight case which forced a ram down onto the water. If demand exceeded supply, pressurised water would leave the tower, thus regulating the system. As the tower emptied, the weight case dropped so that the water remained under pressure.

Today, visitors to the tower can walk up spiral stairs inside the weight case to a viewing platform at the top of the tower. From there, we enjoyed views over Limehouse and the surrounding area, aware that we were standing on a near-forgotten piece of London's industrial history. So nearly forgotten, in fact, that the tower was only preserved in the 1970s under the mistaken belief that it was a railway signal tower.